The Euro received further support against the US dollar in yesterday’s trading session after comments by a European Central Bank board member who raised concerns about the level of inflation in the Eurozone.

The headline inflation rate in Europe, as shown last Friday, hit an all time high and is currently running at 5% which is up from 4.9% last month and is well above the central banks target rate. Until now  ECB board members have been brushing off the record inflation figures as temporary which meant there was no indication of any rate hikes to come but that all changed yesterday.

In a speech yesterday, ECB board member Luis De Guindos told an audience that like the US, Inflation is not going to come down anytime soon and the ECB should prepare for this which led some to speculate a rate hike may now be on the table.

"Inflation is not going to be as transitory as forecast only some months ago, the assessment of risk for inflation is moderately tilted to the upside over the next 12 months." Mr De Guindos said.

The highlight of the European session will be a speech by ECB President Lagarde and markets will looking for views on monetary policy and in particular inflation and if she also thinks the high number is temporary.

From the US the market will await December retail sales figures and market participants will be looking for any impact of the latest spike in consumer prices on spending considering inflation in the US is sitting at its highest level in over 40 years.

Other economic news to be released from the US includes industrial production and Michigan consumer sediment index figures however, these should have a muted impact on the markets. 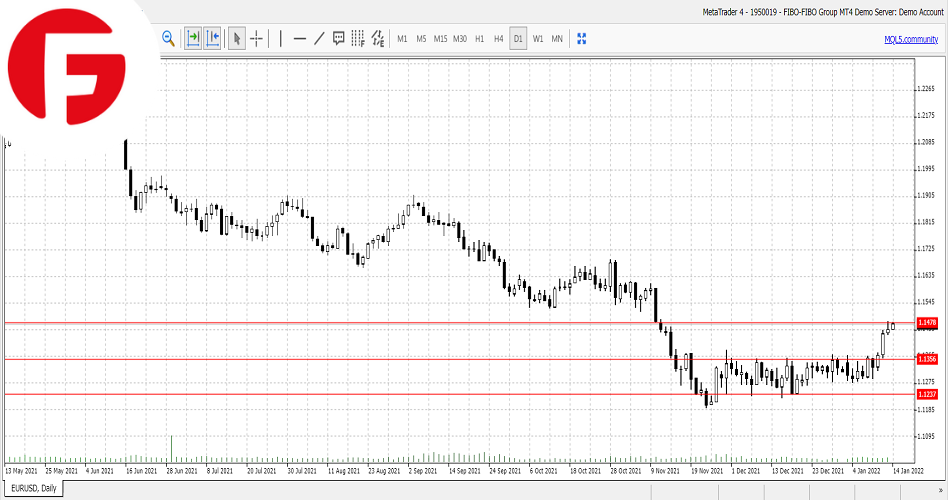 On the chart we can see that the EUR/USD is facing resistance at the $1.1478 mark just like it did in yesterday’s trading session and considering the strong run the Euro has had this week the resistance level is likely to hold and we may even see a slight pullback as traders book in profits to close out the week